For the Umonhon, religion and medicine were always intertwined. The buffalo medicine-men were greatly respected and said to have received their knowledge through visions.

This is the medical knowledge that surrounded Susan La Flesche Picotte, MD, as a young girl growing up on the Omaha reservation. She had great respect and appreciation for the customs of her people but was also aware of the “white medicine-men." She saw how her people were ignored by Omaha Agency physicians and needlessly suffered as a result.

She resolved to do something—to commit to walking a line between two cultures. She would learn the ways of the white medicine-men. She would become a physician.

After graduating from Woman’s Medical College of Pennsylvania, Dr. Picotte opened her practice on the reservation and dedicated her life to improving the lives of her people. She campaigned to ban alcohol on the reservation, pioneered new treatments and preventions for tuberculosis, and lobbied for an end to the federal government’s conservancy over tribal members’ land and finances.

Dr. Picotte suffered from mastoiditis—a bone cancer in her head and neck—during much of her later life. She in died September 15, 1915, at her home in Walthill, Nebraska. She was 50 years old.

UNMC is located on the traditional land of the Umonhon (Omaha Tribe). We thank tribal members, past and present, for their strength and resilience in protecting this land, and aspire to uphold our responsibilities according to their example. 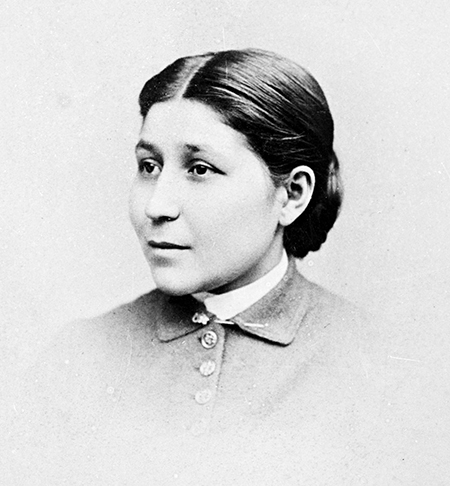 Portrait of Susan La Flesche Picotte, MD, as a medical student at the Woman’s Medical College of Pennsylvania, c. 1888

“I have an advantage in knowing the language and customs of my people and as a physician can do a great deal to help them.”

To the commissioner of Indian Affairs asking for appointment as the Omaha Agency boarding school’s physician, June 13, 1889 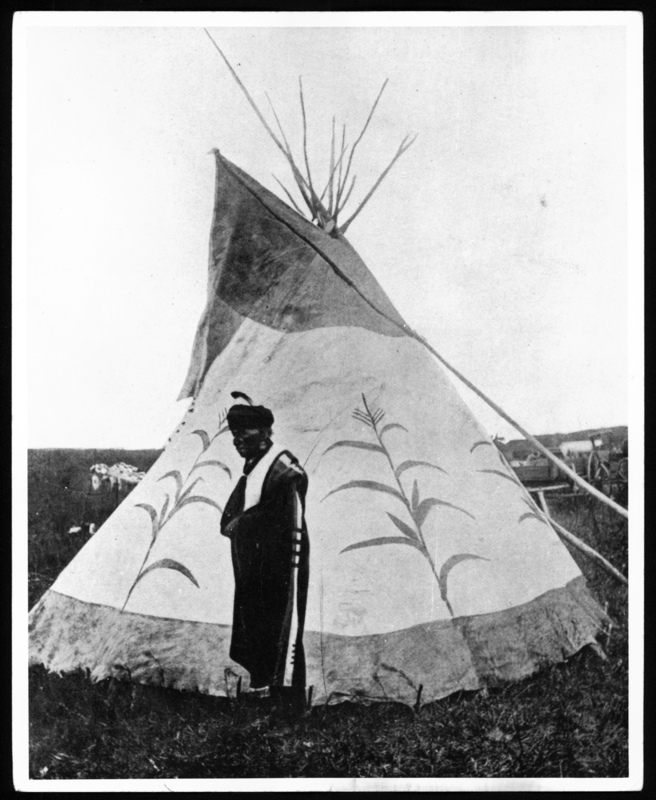 For the Umonhon , the three Sacred Tents—Tent of War, Tent of the Sacred Pole, and Tent of the White Buffalo Hide—were critical to ensuring a successful buffalo hunt every year. Each tent had a keeper who cared for the sacred items inside and knew the songs and rituals for the hunt. When the buffalo hunts ended in 1876, the tent keepers maintained their vigil until their deaths, but resolved to let the songs and rituals die with them. However, Francis La Flesche, brother of Dr. Susan La Flesche Picotte, and ethnographer Alice C. Fletcher, convinced the keepers to send the sacred items from the Tent of War and the Tent of the Sacred Pole, along with written copies of their songs and rituals, to Harvard’s Peabody Museum of Archaeology and Ethnography in order to preserve them. The sacred white buffalo hide was stolen from its tent and never recovered. 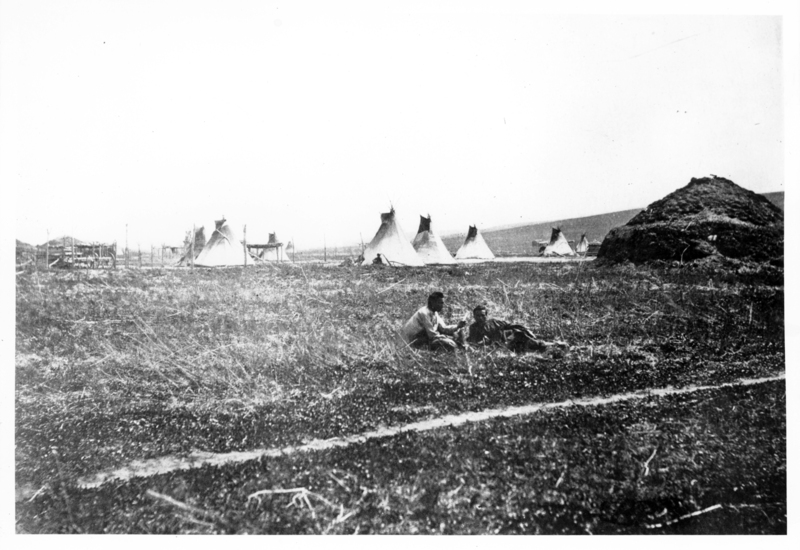 An Omaha Tribe village in the early days of the reservation, c. 1860

In 1854, elders of the Umonhon signed a treaty with the federal government ceding their hunting grounds north of the Platte River. In exchange, the Umonhon received 300,000 acres of land 70 miles north of Omaha City. Joseph La Flesche was one of seven tribal leaders who signed this treaty, and thus has a divided legacy within the Umonhon.

“I shall always fight good and hard against [anything] that is to the Tribe’s detriment, even if I have to fight alone, for before my God I owe my people a responsibility.”

In a telegram to Washington, D.C., asking that the Umonhon have the right to make decisions about the use of their reservation land, September 1909

“I believe in prevention of disease and hygiene care more than I do in giving or prescribing medicine, and my constant aim is to teach these two things.” 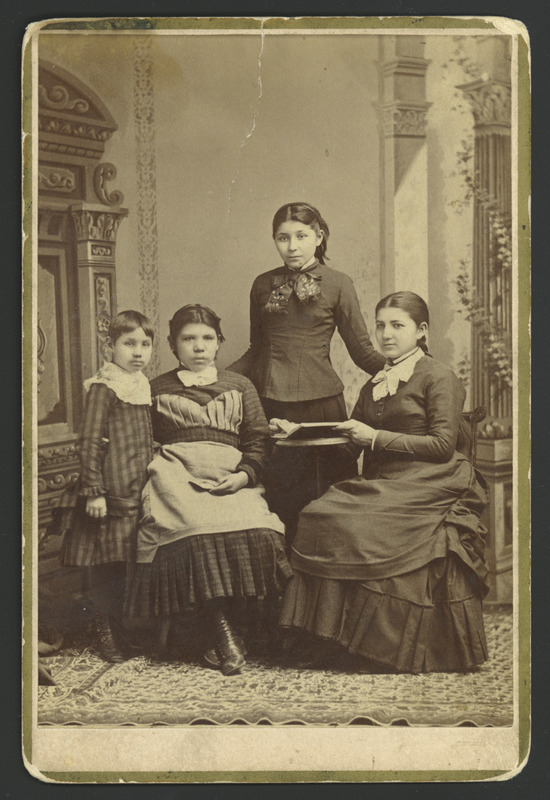 Having studied at the reservation school in early childhood, Dr. Picotte, standing here with her older sister Marguerite (right) and two other students, attended the Elizabeth Institute for Young Ladies in Elizabeth, New Jersey, from 1879 to 1882. Her coursework included arithmetic, reading, writing, spelling, composition, philosophy, literature, and physiology. Because there was no money to bring the girls home during breaks, Susan and Marguerite spent 36 months in the white world, away from the reservation and their family. 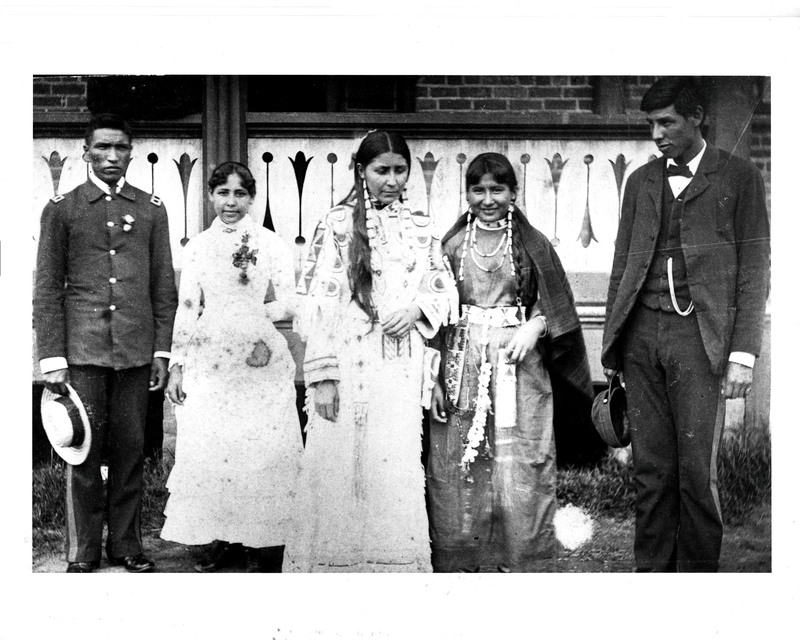 Courtesy of the Hampton University Archive

Hampton Institute in Hampton, Virginia, was established as a historically Black college following the American Civil War, but also opened its doors to Native Americans. Dr. Picotte attended from 1884 to 1886 with her sister Marguerite, half-brother, Carey, and ten other Omaha children. She graduated as salutatorian on May 20, 1886, and received the Demorest prize, given to the graduating senior with the highest examination scores during their junior year. 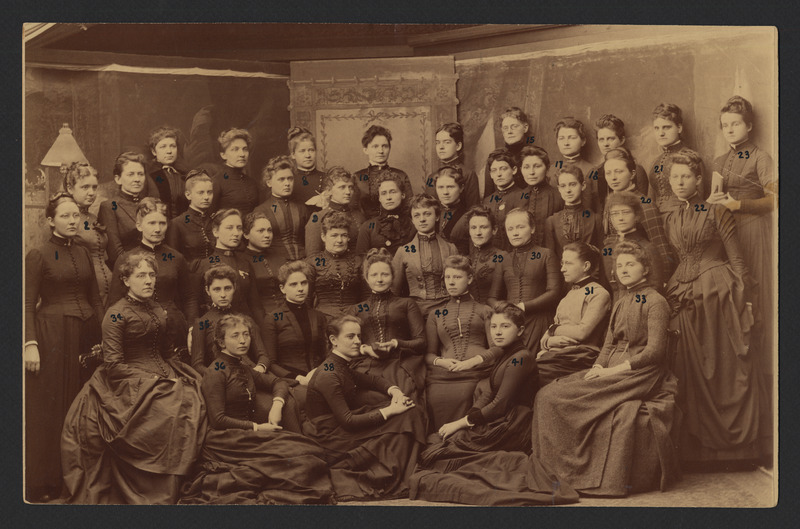 Women’s Medical College of Pennsylvania was founded in 1850 and was one of the few medical schools in the U.S. willing to admit women. Dr. Picotte was able to obtain a scholarship through the Connecticut Indian Association to pay for her tuition, housing, books, and supplies. Their only request was she remain single during her studies and for a few years following graduation to focus on her work. Susan La Flesche, MD, graduated March 14, 1889, as valedictorian of her class, pictured here in the fourth row, fourth from the right. 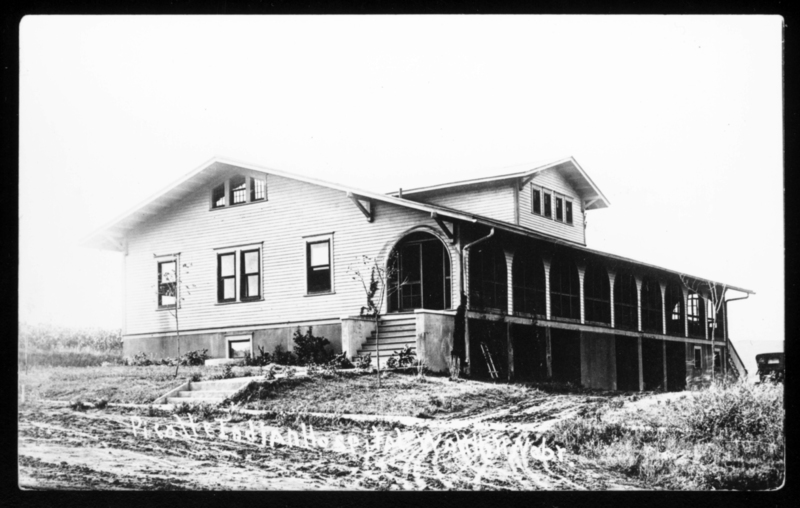 Walthill Hospital opened on January 8, 1913, as the first modern hospital in Thurston County and was built entirely through $10,000 in private donations. Dr. Picotte had dreamed for years of providing a single source of health care for the community—both Indian and white, where care was provided in both the Omaha and English languages. In addition to treatments and operations, the hospital hosted classes to teach people the benefits of personal care so they would not need a doctor. After her death, it was named in her honor. The hospital was recognized as a National Historic Landmark in 1993. In 2018, it was added to the National Historic Trust’s list of the Eleven Most Endangered Historic Places. Efforts to restore and reopen the hospital as a historic site are ongoing. 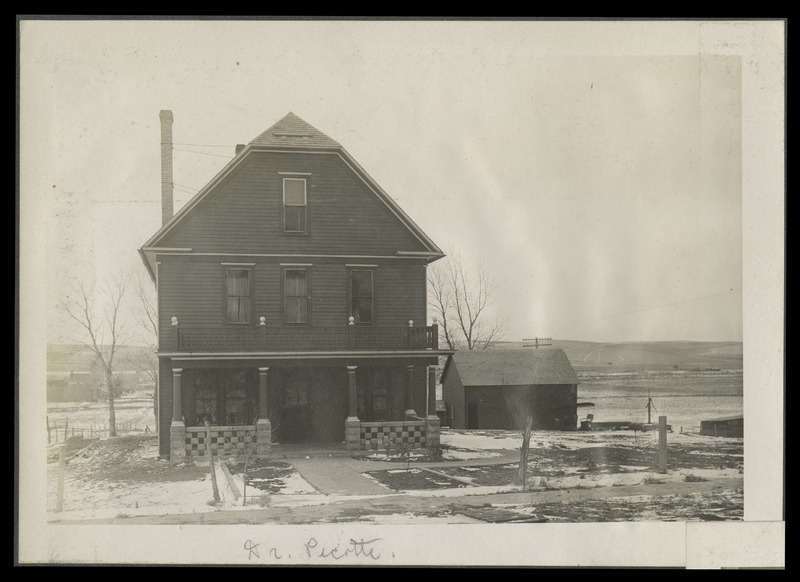 Dr. Picotte designed and built her home in Walthill, Nebraska, in 1906. She hosted concerts, lectures, and gatherings for both tribal members and whites living in the area. She lived there until her death in 1915 and her funeral was held in the parlor.

Passionate about bettering health and personal comfort, Susan lobbied her patients, her family, those in her community, and the local, state, and national governments about ways to better their lives and the lives of the Omaha Tribe. 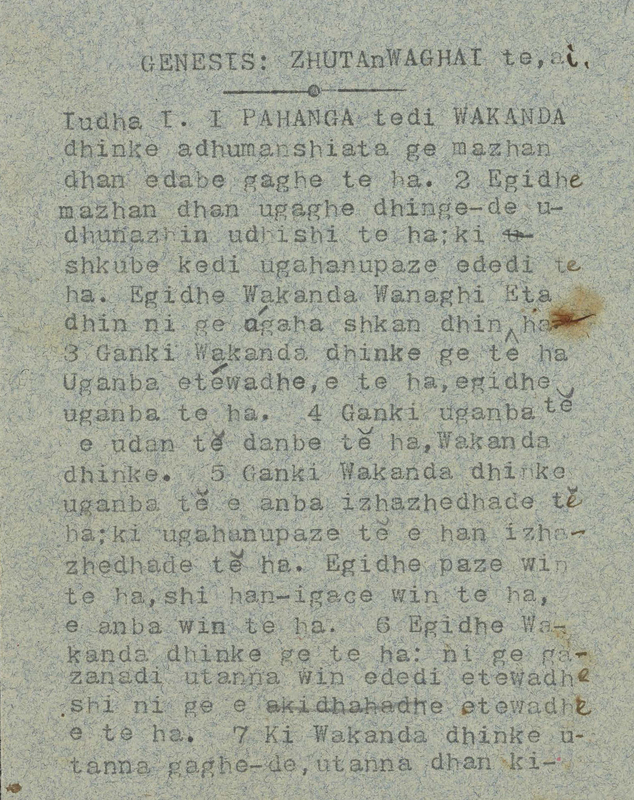 Faith and church were vital parts of Dr. Picotte’s life. She was the only Native American appointed as a medical missionary by the Presbyterian Board of Home Missions. She was unapologetically Christian and a supporter of the Presbyterian church throughout her life. Still, she appreciated the traditional ceremonies, language, and beliefs of the Omaha, ultimately succeeding in blending them with her Presbyterian practices. 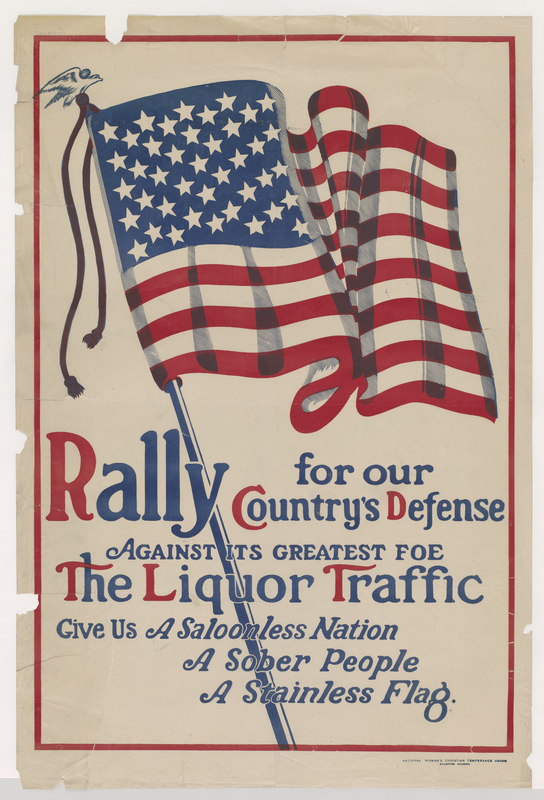 Temperance and bans of liquor sales on the reservation began with Dr. Picotte’s father, Joseph La Flesche, and she picked up the mantle after his death. In 1906, she led a delegation to Washington, D.C., and successfully lobbied for legislation that every property deed in Walthill or any community established within the reservation is forever prohibited from selling liquor. However, there was nothing legislation could do to stop tribal members from journeying to other towns to buy alcohol. 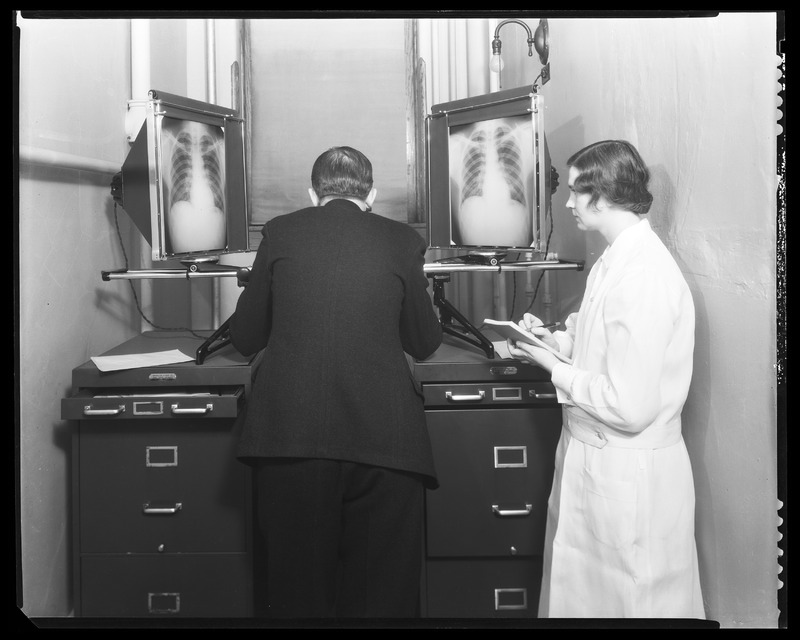 Dr. Picotte was a staunch advocate for public health. Tuberculosis killed about 200,000 people in 1911. She worked to educate members of the Tribe on the benefits of opening windows for fresh air, having those who were sick cover their coughs with handkerchiefs or paper, and using individual rather than communal drinking cups. She also campaigned against the housefly and, due to her efforts, screens began to cover doors and windows so the benefits of fresh air and sunshine could still be enjoyed without the risk of further disease. 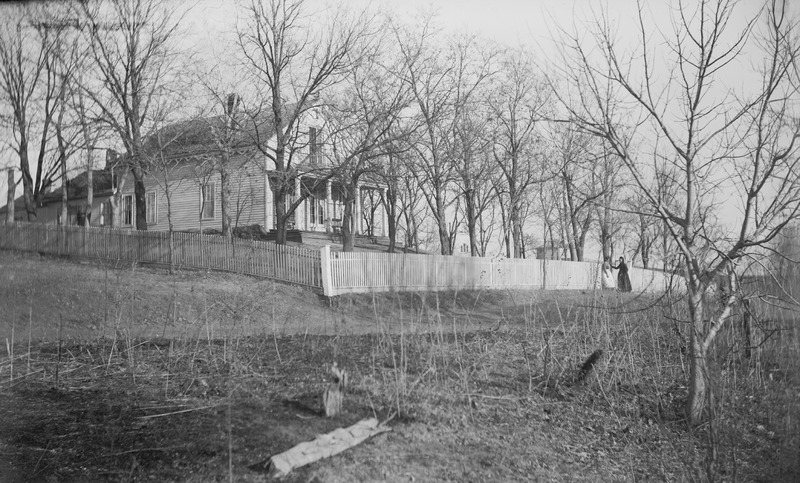 Dr. Picotte, like many others in her family, was a tireless advocate for Tribal sovereignty and self-determination—for the Omaha to have the freedom to manage their own affairs. In 1882, the Omaha had been the first tribe awarded allotments to be overseen and administered by the federal government for 25 years. In 1909, the year of its expiration, the allotment period was unexpectedly extended. Dr. Picotte wrote many letters on behalf of the Omaha, and in 1910 was one of four delegates chosen to speak with the Secretary of the Interior in Washington, D.C. The first Competency Commission was established to loosen the reigns of federal oversight of the Tribe. Unfortunately, the Commission’s conduct did not put the needs of the Tribe first and resulted in land being sold to neighboring whites instead of being retained by the Omaha. 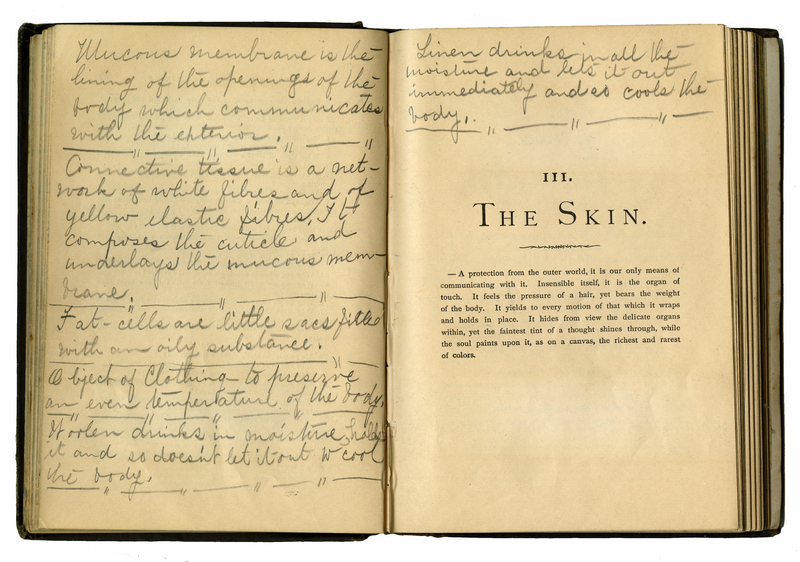 This textbook shows the notes Dr. Picotte took during her physiology class at The Hampton Institute at age 18. This introduction served her well at the Women’s Medical College of Pennsylvania two years later. A driven and dedicated student, Dr. Picotte graduated valedictorian of her class, and thereby became the first licensed Native American physician in the United States of America. 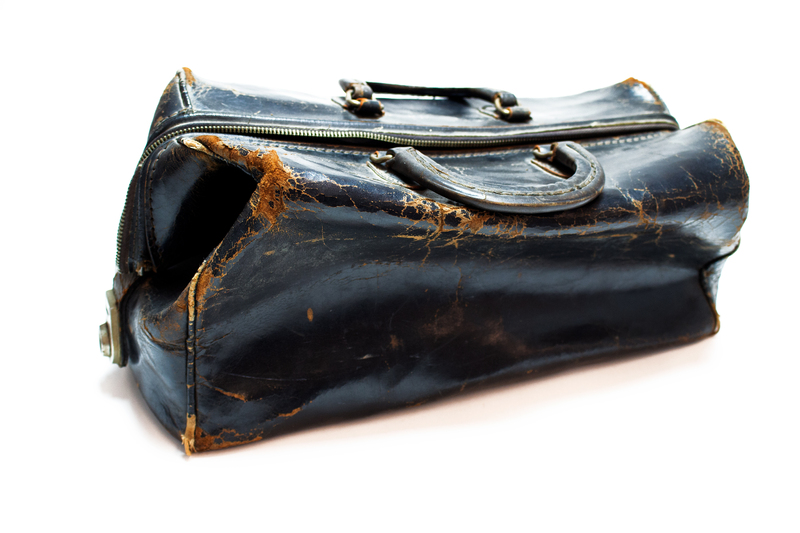 Educated first at the reservation primary schools, then at the Elizabeth Institute in New Jersey, and the Hampton Institute in Virginia, Dr. Picotte was an accomplished scholar. She spoke four languages fluently and took part in the customs and traditions of both the white world and of the Umonhon. 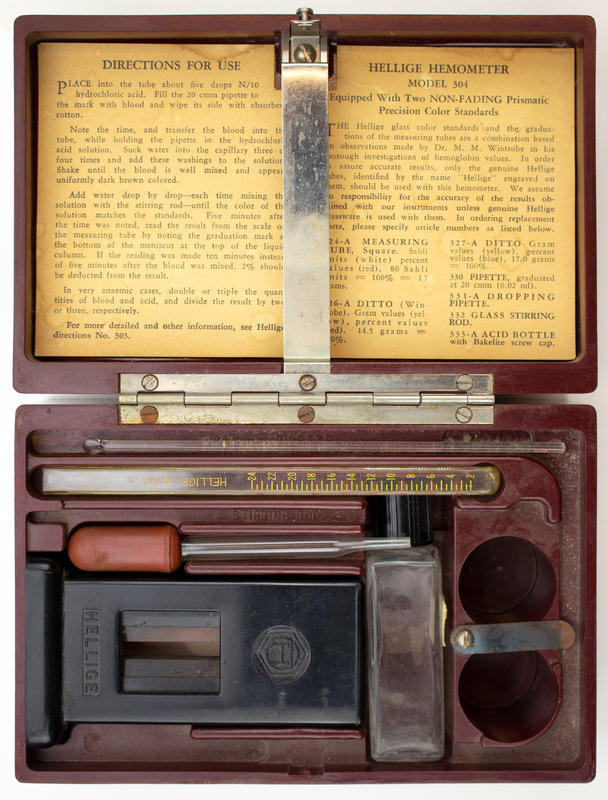 Developed in the early 20th century, the Hellige hemometer was the most accurate way, for its time, to estimate the amount of hemoglobin in a patient’s blood sample. Dr. Picotte used this kit at the bedside of her patients to deliver care more quickly. 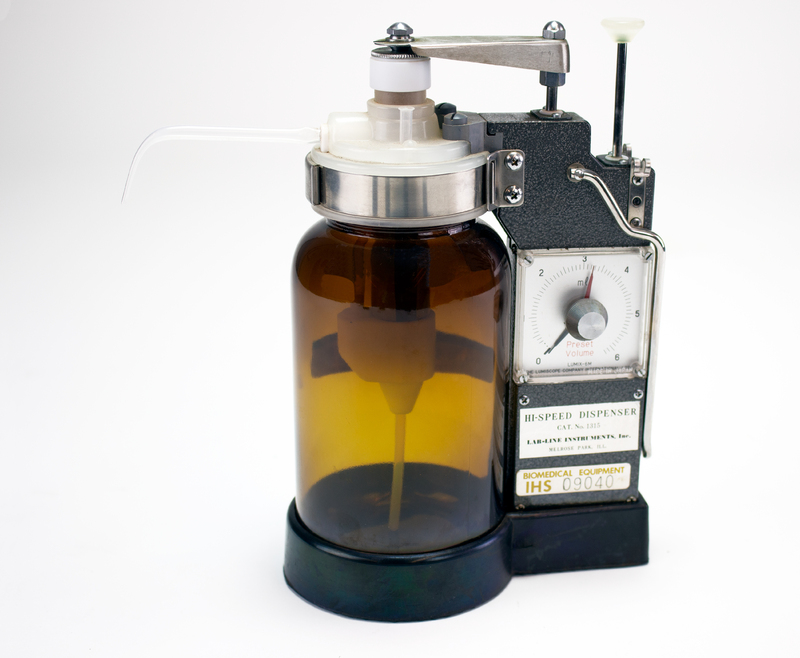 For rural physicians who often mixed their own medicines for patients, the hi-speed dispenser removed all the guesswork. Using the dial on the side, Dr. Picotte could dispense the exact amount of whatever liquid she needed quickly, efficiently, and exactly—every time. 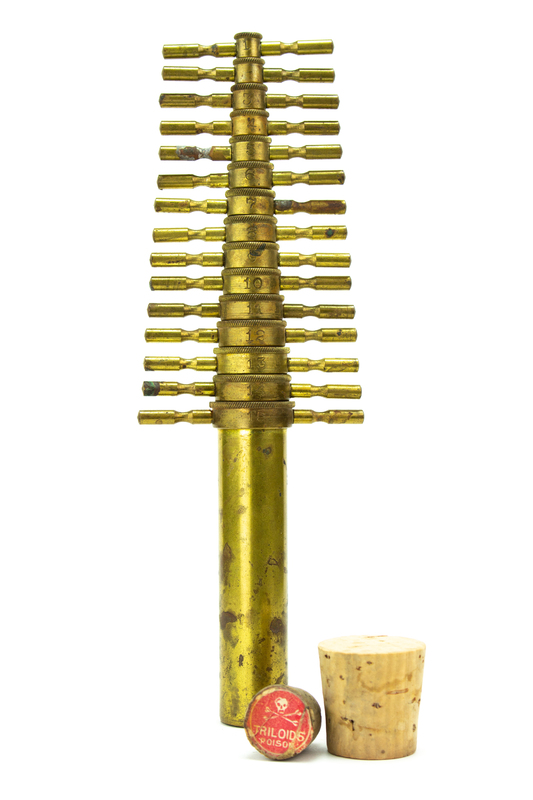 Rural health professionals mixed medicines specific to each patient’s needs. These were transported in glass bottles of varying sizes and required a custom-made cork stopper to prevent leakage of the medicine. A brass cork cutter punch set was just the tool required.

After selecting the appropriately sized cutter, a physician pressed it into a piece of bark, usually from the Portuguese cork oak tree. The cork was then soaked in water to make it pliable and then inserted into the bottle.

This cork punch set was used by Dr. Picotte as she treated her patients. 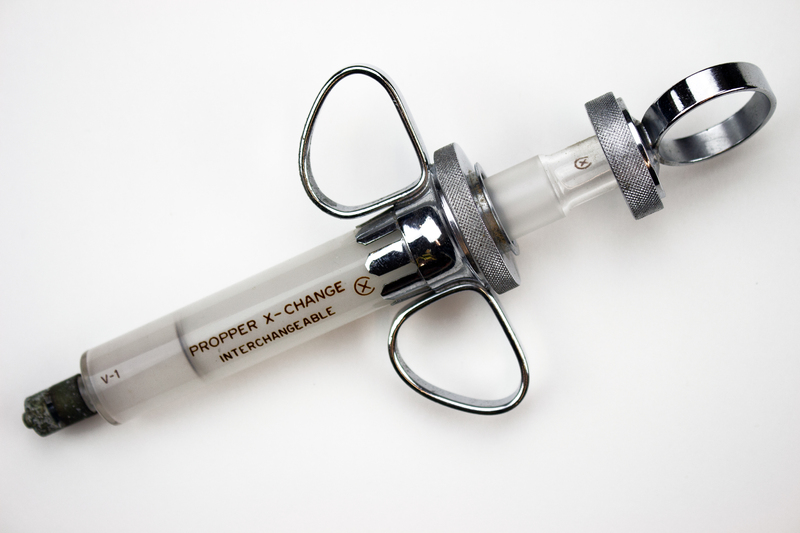 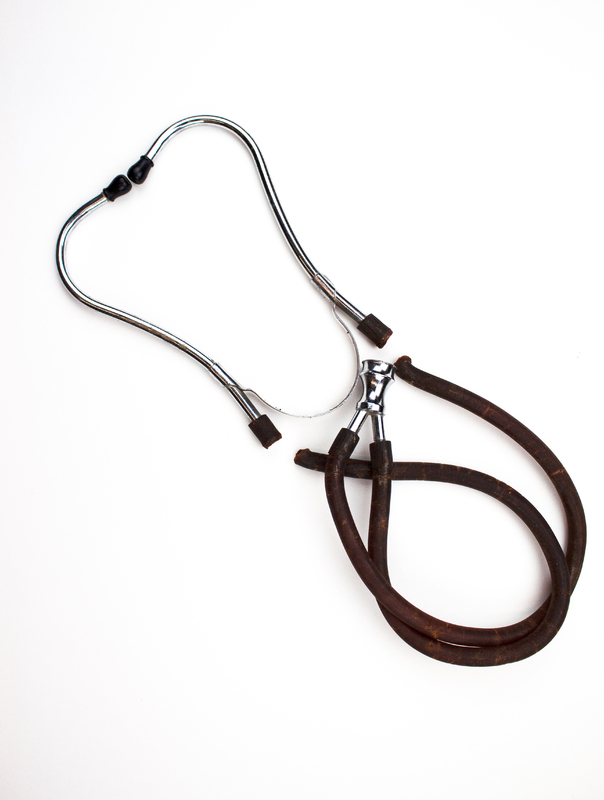